CSS has been in a relationship with Abel Learwellie, the founder of the Camp for Peace since 2011.

What began through a horrific personal journey of being a child soldier, Abel has dedicated his life to Peace and helping other child soldiers become rehabilitated into their communities through the vocational training that is offered at this one-room schoolhouse called Camp for Peace. campforpeace.org

This past year, after seeing what was happening with the men and former child soldiers, Abel was approached by the women in the village who asked to learn a trade for themselves so they could help support their families. 76 women showed up for the first training, and so to respond to the need, an entire new building was built and new staff hired to help the women learn to weave.

The effect of COVID 19 and the current crisis in Ukraine and Russia has intensified inflation by more than triple in Liberia. These unforeseen circumstances have created an unprecedented gap in the Camp for Peace operational budget. The cost of 25 kg rice has risen from $7.00 to $20.00, a gallon of gasoline from $3.7 to $10.00, cement from $6.00 to $15.00, etc. Not anticipating these changes and how they would affect the entire operation when they began construction, Camp for Peace is finding themselves in immediate need of an additional $1500. This is to pay their staff so that they can live and continue to do this important work.

If you can find it in your heart to donate even just $5 to this effort using the link below, it would mean so much to us and to Abel, who has worked tirelessly to transform his community and his country. Abel stands as a beacon for Peace and for what is possible when we lead with our hearts. Thank you for helping this most important effort. 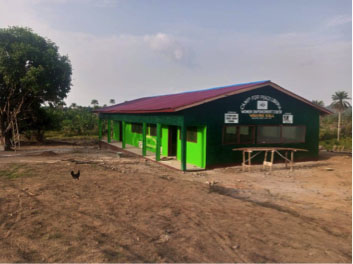 Camp for Peace Liberia is a non-profit organization working with young people to promote sustainable peace and development. It was established in 2005 by its founder, B. Abel Learwellie and other child soldiers while pursuing degrees at the University of Liberia. It mainly works in the regions of Montserrado, Margibi, Bong, and Lofa... It is a fully registered non-for-profit NGO – Government of Liberia registration number MPEA/NGO/AC#1036.

From their experiences as former abductees and orphans – many of whom lost immediate and extended family members, friends and neighbors and suffered displacement – led them to commit to the ongoing and unmet needs of former child soldiers and ex-combatants as well as other youths that were equally affected by the war.

At Camp for Peace Liberia, we have formally prepared ourselves as educators, human rights activists, medical officers, administrators, environmentalists, and in other professional fields through university education and work experience. This enabled us to organize this organization to carter to marginalized and other war-affected youths.

Camp for Peace Liberia works to rehabilitate, reintegrate and empower those impacted by conflict and HIV/AIDS in Liberia. CFP-Liberia has been doing this through livelihood support programs, camping program, education, vocational training, peacebuilding, and health, agriculture and human rights activities.

Camp for Peace Liberia believes that former child soldiers can work themselves out of poverty with dignity if they are not treated as an object but as a subject. Therefore we use multiplicity strategies to combat unemployment by addressing the challenges and reality of life faced by former child soldiers since we know that children born in these situations are not their own making but caught up in the situation.

The overall, long-term development goal of this project is ultimately to rehabilitate 5,000 former child soldiers, ex-combatants and other vulnerable youth through vocational education four counties of Liberia; Montserrado, Margibi, Bong and Lofa to full economic and social participation, transforming them from an ongoing challenge into a considerable asset to their communities.

"The National Patriotic Front of Liberia (NPFL) captured me as a child soldier at the age of 12 and my parents were killed right before my eyes. This really got me angry and wanted to revenge on everyone who came on my way. I missed my parents so much and I got traumatized and felt that there was no hope for me. I got involved with drugs and alcohol. But after going through a series of trauma healing training, I finally decided to go to school to acquire skills to help my community and myself. Thanks to all our sponsor for making me human being again." - Pewee Flomo.

"There are times in our lives when we meet really remarkable people who walk in humility and inspire all of us to make the world a better place. Abel is one such person.  A teacher and advocate for social justice moved to action by his own personal story that touches the world we live in now. We are honored to be able to support his amazing work to rehabilitate former child soldiers through this crowdfunding campaign." - Darlene Hunter CSS Executive

For more info about the donations, call CSS and ask for Valerie 707/604-7362 or send an email at css.valeriehausmann@gmail.com.

The Bonpo Education and Sacred Site Preservation: The Bonpo practice is an ancient indigenous Himalayan healing system. The method draws its healing power directly from higher spirits and from the natural world to promote total wellbeing (mental, emotional, spiritual, physical, social), and to protect and preserve all life forms. This spiritual practice predates all organized religions, including Buddhism, and all modern hospital systems of health. See Gofundme page.

Akha Orphanage: Akha Children's Dream Home - Awakened Connections - The hill tribes of the north Thailand are indigenous tribes at the lowest social and economic rank of the country and region. One of these tribes is called the Akha, originally from Tibet. The Akha mainly live in destitute conditions. Deeply caring and loving people, with the basics of life not being met across the board, the first priority for them is the children. When they were asked what would help them, they requested a children’s home. See Awakened Connections Information page.

mä creative inc. - Grandmothers Wisdom: Reverence For All Creation is a multimedia project which includes a book, video, photography, paintings, and a website, recording the personal and intimate oral history of each of the International Council of Thirteen Indigenous Grandmothers; how, as taught by their ancestors, they live and pray, work with plant medicines, and conduct ceremonies and rituals in their homes, on their lands and in their communities. See the mä creative inc.Information page.